06/10/16
Back to articles
Tweets by DundeeCouncil 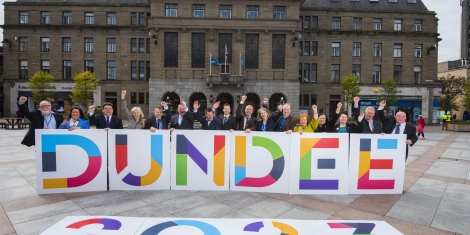 Fraud can happen to anybody. Often the perpetrators of these crimes can be very convincing and are skilled at creating an element of trust between them and their (potential) victim.

The one year ‘Take Five’ campaign aims to engage, empower and educate everyone on how best to protect themselves against financial fraud. Its main message is ‘take five minutes - stop and think’.

The Adult Support and Protection Committee is pleased to play its role in supporting this National campaign.

In Dundee, there is ongoing work around financial harm within the multi-agency Financial Harm Group which reports to the Adult Support and Protection Committee. This group has worked closely in partnership with the Dundee Community Safety Partnership, Trading Standards and Money Advice services, setting up events such as ‘Think Jessica’, a Chief Officer Group Financial Harm event and briefing for elected members.

The Independent Convenor of the Adult Support and Protection Committee, Colin McCashey said “The Financial Harm Group has also identified the important link banks and other financial institutions have in stopping Dundee residents experiencing financial harm due to scams. Following an initial meeting with Dundee based banks in January 2014, this work has been built on by regular contact through local Trading Standards. I am also pleased that we now have a banking representative on the Dundee adult support and protection committee. Additionally, we are working closely with the Scottish business crime centre. It's only if we all work together we can give advice to families and protect the most vulnerable. The key goal is to minimise financial fraud, most especially the amount of money lost yearly to criminals who prey on the vulnerable and elderly.“

“As a council, we realise that innovative means must be employed to stop this scourge on our elderly and vulnerable residents of Dundee.

“Through closer working with banks, we can attempt to minimise the amount of money lost yearly to scammers who prey on the vulnerable and elderly. Often the perpetrators of these crimes can be very convincing and are skilled at creating an element of trust between them and their potential victim. It is therefore important that bank staff act as a deterrent to this type of crime.”

Raymond Lynch from Dundee City Council’s Trading Standards section said “Scams prevention and protecting consumers is one of our priorities — locally with our partners we are trying to protect consumers in vulnerable situations within our communities and safeguard them from future harm.

Take Five is a national campaign that offers straight-forward and impartial advice to help everyone protect themselves from preventable financial fraud. This includes unsolicited mailing and phone-based scams as well as online fraud – particularly where criminals impersonate trusted organisations. Led by Financial Fraud Action UK Ltd. (FFA UK), it is being delivered with and through a range of partners in the UK payments industry, financial services firms, law enforcement agencies, telecommunication providers, commercial, public and third sector.

Businesses in Dundee are being invited to join the new ?Scotland Loves Local? service, a national...