26/12/17
Back to articles
Tweets by DundeeCouncil 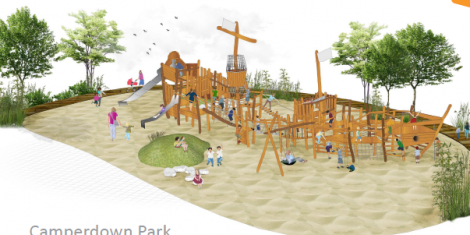 PLAY EQUIPMENT in a popular city park is in line for more than £400,000 worth of improvements.

Since 2012 works have been carried out at Camperdown Park as part of an on-going development plan aiming to rejuvenate one of the city’s green jewels.

Plans for the park include transforming the former boat pond into a large play area with a large ship, reminiscent of ‘the Galleons’ which were removed in 2001.

Additional play equipment and landscaping, which will include a wheelchair inclusive boardwalk and planting will also be introduced. The play area will be resurfaced using sand, bark and grass.

Neighbourhood Services Convener Kevin Cordell said: “The play area is the most popular visitor attraction in the park and it is important that it’s at the heart of the development plan.

“I’m sure a few parents will be glad to see a boat being reintroduced as a major part of the new play area, it’s something which has fond memories for a lot of people and we hope the new one will make as much impact as the old ones did.

“Play is a key part of every child’s development, enjoyment and social life and this latest round of works highlights our commitment to supporting and enhancing play opportunities in Dundee.”

The Neighbourhood Services Committee approve a recommendations on Monday (January 8).