12/04/18
Back to articles
Tweets by DundeeCouncil 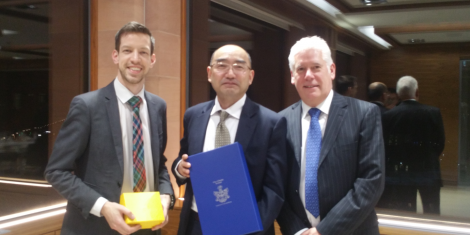 The announcement follows the hosting of a senior delegation from COES by Councillor Alexander in November 2017. Mr Alexander hosted the Vice President of COES, the Commercial General Director and the Commercial and Business Development Manager for talks about decommissioning opportunities in the city.

After a successful round table event, COES have been progressing discussions on a formal strategic base within the city.

Mr Alexander said, “From the outset, I very clearly stated the need to be determined and proactive in bringing opportunities to our doorstep. Investment and jobs will not simply land on our lap, we need a dogged determination to ensure that we engage with, promote and encourage businesses to make Dundee their home.

“I’m absolutely delighted that COES have set out their ambition to create a decommissioning project base here in our dynamic and growing city following the hosting of a senior delegation in November 2017.”

“Whilst some have knocked our decommissioning credentials, I think it’s clear that there are huge opportunities for Dundee and that we are not resting on our laurels to land them. We know that the value of decommissioning is spread across a number of elements and we want Dundee to be the go-to for everything above and below the sea.

“We want Dundee to be to decommissioning, what Aberdeen is for oil & gas exploration. We’ll be taking nothing for granted over the coming months and years and will continue to work hard to deliver skilled jobs for locals.”

The China Ocean Engineering Shanghai Co (COES) have indicated their strategic intent to establish a project base in Scotland during a meeting with Scotland’s First Minister Nicola Sturgeon in Shanghai.

Dundee City Council, Forth Ports and Dc Thomson collaborated to create DundeeCom – a local organization which was co-funded and set up to secure decommissioning works locally.

The news follows a series of announcements and investments in Dundee’s decommissioning infrastructure including; a £10 million quayside extension, construction of a heavy lift equipment, an MOU with Wellsafe Services and a formal agreement with AF Offshore Decom.

COES is a Chinese state owned company, globally recognised for providing more than 60 years of service to the marine construction and offshore industry.

The company who specialise in offshore construction and decommissioning, ocean going towage, salvage and wreck removal and offshore renewable activity worldwide have been scoping out premises and port facilities to determine the best location logistically central to all the ports on the eastern seaboard of Scotland which will offer the capability and available capacity to serve offshore markets in the UK, Norwegian and Dutch sectors. Dundee has been selected as the location for the COES Scottish project office base. The company anticipates the creation of jobs in Scotland, linked to contract success.

This new presence will allow the company to better position to capitalise on the massive opportunity in Scotland’s offshore oil and gas decommissioning market. Latest forecast estimates from the industry trade association Oil and Gas UK put decommissioning expenditure at £17 Billion on the UK continental shelf alone covering the period through until 2025. Forecast annual decommissioning spend on the Norwegian and Dutch sectors are put at between £400 - £800 Million and £650-£800 Million respectively.

Back to articles
Tweets by DundeeCouncil
Spaces for People Hilltown

WORK TO create easier and safer access for pedestrians to a section of one of Dundee?s most...

WITH lockdown easing and hospitality re-opening for business, one Dundee pub has made a...