16/04/18
Back to articles
Tweets by DundeeCouncil 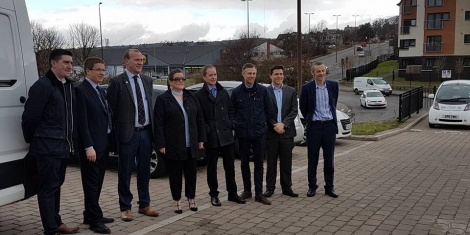 DUNDEE’S drive towards getting more electric vehicles on the city’s streets has received a boost with the opening of a new £330,000 charging hub.

The first of three earmarked for the Lochee ward, the new array in Aimer Square was funded as part of the Office of Low Emission Vehicles (OLEV), Go Ultra Low cities project.

Mark Flynn, depute convener of Dundee City Council’s city development committee said: “As well as new charging points springing up all over the city, like this one here in Lochee, with backing from both OLEV and Transport Scotland we are now able to put them into neighbouring council areas as a way of developing a regional network.

The new Lochee hub has four 50kw and three 22kw chargers and is available to the public and the taxi industry.

Jesse Norman, OLEV Minister said: “We are in the early stages of an electric revolution in the UK transport sector.

“That’s why the UK Government is investing £1.87m in charging points in Dundee. This will support the take-up of electric vehicles in the city, helping to achieve our ambitions to cut transport emissions and improve local air quality.”

Humza Yousaf, Minister for Transport and the Islands said: “I am pleased that Dundee City Council have reached this important milestone. Charging infrastructure is a vital part of delivering our ambition of phasing out the need for new petrol and diesel cars by 2032.

“The great strides made in Dundee on this agenda is testimony to how public sector funding and leadership can work in partnership with private organisations to drive real change.

In a tribute to one of the pioneers of large scale electric vehicle use in Dundee a plaque was unveiled dedicated to local entrepreneur, David Young.

Before his death last year Mr Young was a prime mover in the city taxi industry’s shift away from vehicles with petrol and diesel engines.