21/08/18
Back to articles
Tweets by DundeeCouncil 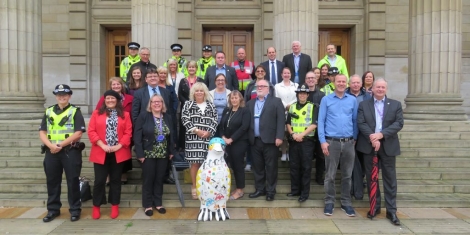 Adults walked to primaries in the city on Tuesday (August 21) as part of campaign to encourage pupils and families to use sustainable transport options while travelling to school.

Parents, councillors, council officials and police officers set off from City Square to travel to three city primaries at the start of the school day to highlight the new Go Safe Dundee promotion for the whole city.

Pupils met the walkers at Blackness, Dens Road and Glebelands primaries to hear of their experiences.

Go Safe Dundee is intended to encourage pupils to take healthy and sustainable transport options – whether that is walking, cycling, by bus or by ‘park and stride’.

The campaign is also aimed at parents and drivers. It is appealing for them to park considerately near schools, not to idle their engines while waiting and also to drive safely in the streets nearby.

Depute convener of children and families service Councillor Roisin Smith said:  “Go Safe is a new focus on the issues about travel and roads around schools. It builds on the previous work we have carried out.

“Over the past few years we have been campaigning relentlessly for drivers to act sensibly around schools and not cause danger to children.

“Each of our schools has a Safer Route map. And there are also other alternatives, such as parking further away from school and encouraging children to walk the rest of the way, if you have to bring your car.

“The city council works with a range of partners, including Police Scotland, to constantly monitor the situation around all our schools.”

Diane Martin, a parent who assists with Dundee’s road safety working group, said: “The reason we are doing the walk to schools is to raise awareness for our children’s safety, not only at school but for the city in general. We need to ensure drivers are taking responsibility and due care and attention on the roads. Not only for people in our town but those also coming into the town. In this day and age of mobile phones people are being careless making them take their eyes of the road. It only takes a second and a child or anyone to be hit by a car.

“We would like to encourage parents or family members to join the children on their daily walk to schools. We are in a society where we are always talking about being healthy and how we would like the children to walk, cycle, scooter to school. It can also help with the parking issues we have at schools. Taking the extra time to walk to school will make it so much safer, as children are so small and if big cars are parked wrong then they cannot be seen when trying to cross the road.”