24/08/18
Back to articles
Tweets by DundeeCouncil 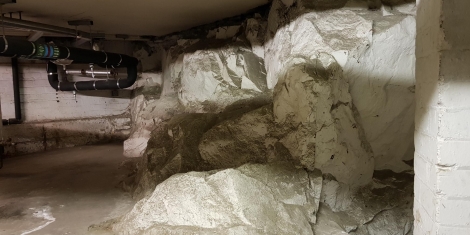 COUNCIL staff renovating a retail unit got more than they bargained for when they stumbled on part of the city’s pre-historic foundations.

Crews in Castle Street tackling the former Kennedy’s Steak House discovered the massive “castle rock” built into the basement of the building.

The huge rock formation stretched back up the hill towards High Street and was the base for the city’s first castle that lends the street its name.

Lynne Short convener of Dundee City Council’s city development committee said: “In light of the interest in the city’s underground with the recent opening up of the Vaults and our wider heritage in general, it’s amazing to find out that the very rocks the city of Dundee was first built on are still there!

“The building created around it has an interesting enough history in itself as it was the only one left standing in the area during the early 20th century when there was a massive clearance to make way for the Caird Hall complex.

“Castle Street was cut through the vast formation on which the ancient Castle of Dundee stood but clearly large chunks of the rock remained under this building when it was put up.”

The first historical record of a structure being erected on the then vacant plot at what is now 31-33 Castle Street is from 1799-1800.

Dundee Town Council took ownership of the site in 1914 as part of the Central Improvement Scheme when many buildings were earmarked for demolition to make way for the Caird Hall.

But contemporary photographs held in the City’s Archives show that 31-33 Castle Street was not demolished. The sandstone building was annexed and included in the design and construction of the new Caird Hall complex and received a fresh, modern appearance.

In 1994 it was given a Category B listing, and having undergone a facelift and refit the 79.81square metres of retail unit will be available for let in a few weeks.

Unfortunately history buffs can no longer see the castle rock as the final touches to the building included the provision of false walls and new flooring in the basement.

More information on the unit is available on the Locate Dundee website at https://archive.dundeecity.gov.uk/property/property_details.php