22/10/18
Back to articles
Tweets by DundeeCouncil 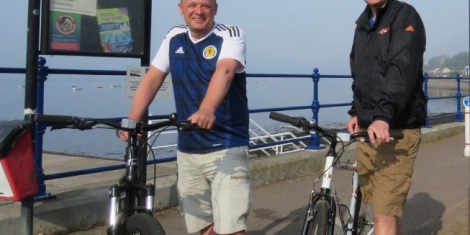 FACILITIES to help boost cycling in the city have improved in the past two years, but more progress will be made according to a new report.

The first two-yearly update on Dundee’s cycling strategy shows a number of positive developments to infrastructure, relationships and awareness in active travel.

Among the achievements of the strategy since its 2016 launch, was the appointment of a council cycling spokesperson to give greater political leadership. Cllr Kevin Cordell, a lifelong keen cyclist, was appointed to the role.

He said: “Continuing to work together through the Dundee Cycling Forum, which itself was set up as a result of the strategy, and improved co-ordination of activity through the Cycling Working Group will see more developments coming on stream in the coming months.

“It would be the easiest thing in the world to focus on what hasn’t been done and indulge in a bit of council-bashing, but progress is being made and more will be achieved.”

Mark Flynn, deputy convener of the city council’s city development committee added: “The physical infrastructure to support more active travel, including cycling, has been improved since the strategy was launched.

“Within a few weeks there is more to come with the upgrading to the surface for cycling at Dundee Docks, and the reopening of the pedestrian route, as well as the opening of the cycle parking facility at the new Railway Station concourse.”

The report, which will be considered by the city development committee on Monday October 29, also highlights improved delivery of Bikeability across Dundee schools as the successor to the former cycling proficiency test.

At its launch in 2016 the Dundee Cycling Strategy sought to develop policies and deliver under six key headings:

The update report identifies progress in each of the categories.