Walking and cycling on safer streets

06/02/19
Back to articles
Tweets by DundeeCouncil 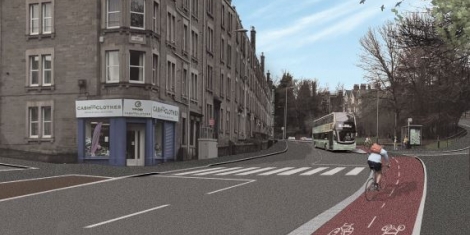 PIONEERING proposals that could make cycling and walking the natural choice for local journeys in and around Dundee could come a step closer.

The Northern Links project plans investment in cycling and walking routes along three corridors into the city centre; Lochee Road, Victoria Road and Princes Street/King Street to restore the balance away from traffic and in favour of people.

An initial consultation in November showed strong support for moves to make these streets safer and more convenient for active travel by redesigning public spaces in a more attractive, healthier and more sociable way.

Mark Flynn depute convener of Dundee City Council’s city development committee said: “We were really encouraged by the initial consultation where people showed strong support and enthusiasm for investing in segregated cycling infrastructure and we are grateful to everyone who took part.

“That backing has spurred us on to the next stage with refined proposals and some visual representations of what the new layouts could look like so that people can get a better idea of how active travel infrastructure could look.

Cllr Kevin Cordell Dundee City Council’s cycling spokesperson added: “The visual representation of what a segregated cycleway on Lochee Road might look like really brings home how our streets could be set up to encourage more active forms of travel.

“Getting more people to use their bikes for commuting and short journeys around the city would be good for all of us.”

People can see and comment on the designs at https://dundeenorthernlinks.com, by email, or by attending an engagement event, details of which will be announced in the coming days on the website and social media.

The process is supported by the Scottish Government and run by Sustrans, who are looking for “big, bold and innovative projects to restore the balance of Scotland’s streets in favour of people walking and cycling.”

Draft proposals will be submitted to Sustrans by the end of April where decisions will be taken on whether they go forward to the next phase of detailed development.

Reminder to dog owners when out and about

Dog walkers are being reminded of the harms of failing to clean up after their pets when out and...