07/03/19
Back to articles
Tweets by DundeeCouncil 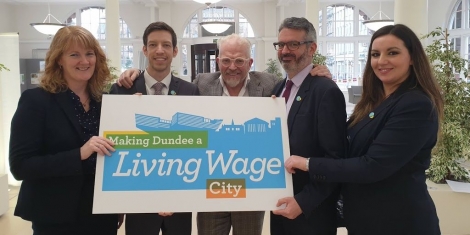 Dundee has today become the first city in the UK to be awarded recognition for a plan to become a Living Wage City and will be implementing their approach as part of Living Wage Scotland’s ‘Making Living Wage Places’ scheme, which recognises and encourages city-level approaches to tackling low pay.

An alliance of prominent employers in Dundee have today launched an Action Plan setting out how they will work together on “Making Dundee a Living Wage City” in partnership with Living Wage Scotland. They become the first city to adopt a new, place-based approach to driving uptake of the real Living Wage by local businesses.

Over 50 Dundee employers have already voluntarily committed to ensure all their staff and subcontracted staff receive a real Living Wage of £9.00 an hour, significantly higher than the government minimum of £7.83.

The 50 Living Wage employers already accredited in Dundee cover the equivalent to a quarter of all workers in the city. The Action Plan launched today sets out how the alliance intends to double the number of workers covered by Living Wage accreditation in Dundee over the next three years.

The Action Plan includes commitments to:

“It is fantastic to see Dundee setting out its ambition to become the UK’s first ‘Living Wage City’.

“The significance of the Living Wage cannot be overstated. Evidence shows that paying it leads to increased productivity, better morale and lower sickness absence. It also demonstrates to the world that an organisation is committed to treating its workforce well.

“While Scotland is making good progress in becoming a Living Wage nation, and punches well above its weight in terms of the proportion of people paid at least the Living Wage, more remains to be done. The Scottish Government is committed to doing everything in our power to put fair work and equality at the heart of our labour market.”

John Alexander, Leader of Dundee City Council who are part of the alliance said:

“The city council is one of the largest Living Wage employers in the city, ensuring that all our workers receive a fair day’s pay for a hard day’s work.

“I am aware that there is still more to do and we will work with partners to encourage and support more employers in the city to pay the real Living Wage.”

“We are delighted to launch the ‘Making Living Wage Places’ scheme and recognise Dundee as the first city in the UK to adopt the approach.

“The commitment of this alliance of employers to the people of Dundee is hugely exciting. We look forward to working with them on making Dundee a Living Wage city. We want to see towns and cities in Scotland work with us to put an end to low pay, and this is the first step on that journey.”

“DC Thomson made a conscious decision to pay all of our direct employees the real Living Wage around five years ago. Having seen the difference it makes to people’s lives, we extended it to all of our group companies and agency colleagues regularly working in our offices, signing up as an accredited Living Wage employer in 2017.

“In these times of economic uncertainty across the UK, it is heartening to see Dundee taking the lead in tackling low pay, and the inequality it creates, by becoming the UK’s first city formally recognised for its Living Wage ambition. Being part of this initiative allows us to work with other like-minded employers to help transform the city and ensure local people benefit from and have a stake in the local community.

“Businesses only thrive when those that work for them and buy from them are prospering too.”

“The Carnegie UK Trust has been delighted to support the development of the Making Living Wage Places scheme and we are thrilled that Dundee is the first place in the UK to make this highly important commitment. We look forward to seeing the progress the city makes and to many other places following Dundee’s impressive lead.”

“Major employers within Dundee are working together to improve the lives of citizens and boost the local economy by making a real Living Wage the norm.

“The Living Wage Foundation has launched the ‘Making Living Wage Places’ scheme to recognise groups of local ‘anchor’ institutions which not only pay the Living Wage to their employers and contractors, but which also seek to use their power and influence to spread Living Wage accreditation through their local area.”

2021 was the most successful year for the Living Wage Movement in Dundee.Over 25 employers signed...