05/08/19
Back to articles
Tweets by DundeeCouncil 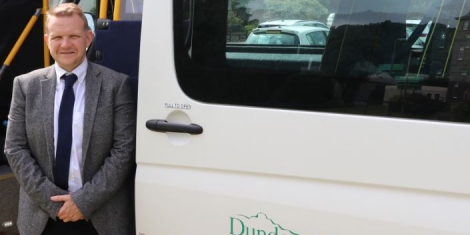 DUNDEE City Council has announced the route of its third Blether Bus service which will launch next week.

Operating from 9.30am to 2.30pm each weekday a round trip journeys is expected to take about 50 minutes.

Alan Ross. Convener of Dundee City Council’s city development committee said: “After consultation with local residents over the summer we’ve come up with a route that will provide direct journeys to a few key destinations in the local community.

“It will also complement the local bus network by providing connections to destinations like Ninewells Hospital and the city centre.

“Following Xplore Dundee’s welcome decision to route its service number four via Roseangle, Magdalen Green and Windsor Street from next week, the Balgay Blether Bus route will focus on communities to the north of Perth Road.

“We believe that this the most effective and efficient route but one of the great things about the Blether Bus is its flexibility, which means we can review the route at relatively short notice.

“I’m sure that the community will get behind the Balgay Blether Bus which has been created for them and with them.”

The Blether Bus will use a wheelchair accessible council mini-bus to deliver a hail and ride service which means that as well as being able get on and off at any of the bus stops along the route, the driver will also pick up and drop off from streets where there are no bus stops.

It has a friendly and welcoming team of drivers who are happy to chat with and encourage passengers to have a blether.

Anyone who wants to use the bus must become a member which can be done on the first day of travel. There is no joining fee and no need for ID. Once given a membership card passengers need to show that along with their bus pass to the driver each time they use the service.