23/10/19
Back to articles
Tweets by DundeeCouncil 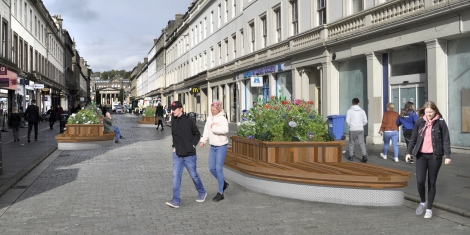 PLANS for £735,000 of investment in Dundee city centre that could see additional seating, street improvements and more public art will be considered by councillors next week.

The money, from the Scottish Government’s Town Centre Fund initiative, will be complemented by the development of a new improvement plan for the area.

Alan Ross convener of Dundee City Council’s city development committee said: “With an increase in visitors and the continued evolving role of city centres it is important that the streetscape keeps pace with these developments.

“More active travel options, the Low Emission Zone just around the corner and the stronger links between the waterfront and the city centre mean it is critical that the experience people have when they are here getting from A to B adds to their overall positive perception of the city.”

According to a report to be considered by the city development committee, since the 1990s long-term planning, strategic investment and creativity have delivered a range of projects in the city centre that have created a strong, high quality, regional centre.

The quality and potential of the city centre’s historic core and the businesses it supports have been boosted over that period by the development and regeneration of core buildings, streets and spaces, including the Overgate, Murraygate, City Square, Albert Square, Tay Square, Reform Street, High Street, Castle Street and Union Street.

Among the projects put forward for a share of the £735,000 is a move to introduce seating and green infrastructure to the carriageway at the south end of Reform Street. This would help change perceptions about the use of the area and encourage more food and drink businesses to occupy vacant ground floor premises.  Additional drop kerb crossing points will also be introduced to the street to increase the level of accessibility.

Work to encourage more people to access City Square from the waterfront by introducing better signage for both Crichton Street steps and Castle Street pend as well as refurbishment work to improve its attractiveness and usability are also proposed.

In addition new bespoke seating is planned to replace the existing picnic benches and some of the perimeter planters in City Square. Other planters will be upgraded to improve their appearance. The new furniture will be designed to increase the seating capacity and to promote the City Square as a destination by reflecting Dundee’s City of Design status.

Other projects include more public art, local venue advertising and completing high quality street improvements in the Murraygate and Panmure Street. Extending these to streets beyond the core, such as King Street, Cowgate and St Andrew’s Street is also being considered.