22/11/19
Back to articles
Tweets by DundeeCouncil 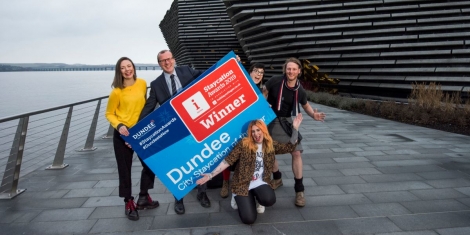 Dundee has won in the UK’s first national Staycation Awards and is now officially the best city in Britain to enjoy a holiday, weekend away or short break without leaving the country!

“We’re thrilled to have won the City Staycation of the Year in the i Staycation Awards,” said Councillor Mark Flynn, on behalf of Dundee, One City Many Discoveries. “We were up against very stiff competition, with the holiday hotspots of York, Brighton & Hove and Bath also being shortlisted for this award.

“In the last few years, Dundee has emerged as one of the most vibrant cities in the country for a staycation. Widely known as Scotland’s coolest – and sunniest – city, Dundee combines the best of contemporary culture, inspiring architecture and a rich historical heritage with fabulous food and drink, good transport links, a great choice of places to stay and a fantastic selection of things to do.”

The i Staycation Awards are a nationwide search for the country’s best loved holiday spots, and the winners were announced on November 21 at a glittering awards ceremony in London by The One Show and Countryfile presenter Matt Baker. Launched by i Newspaper and holidaycottages.co.uk, the awards have 17 categories, ensuring all types of UK staycation are covered, including city breaks, country escapes, family seaside holidays and dog-friendly getaways.

Councillor Flynn, Depute Convener City Development, Dundee City Council, revealed that winning the city category of the Staycation Awards is recognition of the success of the city’s vision to make Dundee one of the best small cities in the UK for a cultural short break. “We’ve focused on collectively telling the story of our city’s transformation from industrial centre to cultural capital – an approach which appears to be working.

“Well over one million people visited our city in 2018, with a 19% increase in visitors to Dundee in the first six months of 2019.

“Our spectacular waterfront setting is now home to V&A Dundee, Scotland’s first design museum, which has already given our city a £187 million tourism boost, as well as a green public space hosting everything from outdoor music gigs to free exercise classes.

“Many exciting new activities have been developed by local businesses and individuals, such as walking tours, wakeboarding in the docks, scenic trips around the area on a vintage bus and dolphin-spotting boat trips on the Tay. These visitor attractions perfectly complement our existing, well-known attractions such as The McManus Dundee’s Art Gallery & Museum, Dundee Contemporary Arts, Dundee Rep, Dundee Science Centre, RRS Discovery, HMS Unicorn and Verdant Works.”

To further enhance Dundee’s reputation as a city staycation destination, a number of new hotels, bars and restaurants have opened, Dundee train station has had a £38 million upgrade and transport links to and from the city have been improved. “We are also installing a fleet of electric bikes, so once they get here, visitors can easily explore Dundee and the surrounding area,” continued Councillor Flynn.

“Dundee is a dynamic Scottish city which looks to the future, offering a refreshing alternative to the traditional tartan, shortbread and bagpipes image. We believe, as do many of our million-plus visitors that Dundee is the best place in the UK for a city staycation - and its great news for the city that the judges of the i Staycation Awards, agree.”

Hanna Tavner, i news said: “Congratulations to all the winners at the inaugural Staycation Awards. The destinations, attractions and accommodation on offer in the UK are truly exceptional and deserve to be celebrated.”

Caroline Warburton, VisitScotland Regional Leadership Director, said: “I would like to offer my congratulations to Dundee for winning City Staycation of the Year, although it comes as no surprise!

“The city’s remarkable rise within Scotland’s travel scene continues as its thriving hub for design, innovation and culture is revealed. Visitors know they can thoroughly enjoy a staycation here, with countless great places to eat and drink, shops galore, easy transport access and a plethora of diverse things to see and do.

“The growing number of visitors all helps the tourism sector’s contribution to the local economy by creating jobs and sustaining communities. The arrival of the iconic V&A has propelled Dundee into the global spotlight and, together with the McManus Gallery, RRS Discovery and Verdant Works, help shine a light on all this incredible city has to offer. This accolade has cemented Dundee’s reputation as a must-see city and we look forward to this continuing in 2020 and beyond.”

Back to articles
Tweets by DundeeCouncil
Olympia maintenance programme

A COMBINATION of survey works, planned refurbishment and repairs could see the swimming pools at...