Record numbers of skylarks at Riverside

05/12/19
Back to articles
Tweets by DundeeCouncil 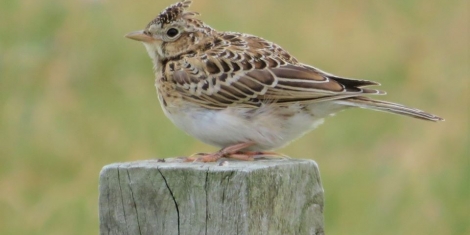 Skylarks have been seen in record numbers at Riverside Nature Park in 2019.

For the fourth year running, the number of skylarks have increased at Riverside, despite a declining trend nationally.

Visitors have been commended for sticking to paths and keeping dogs on leads to help protect the ground-nesting birds.

The Friends of Riverside Nature Park regularly survey the site for skylarks. The first signs of skylarks were in 2016, with four males and one young spotted. In the years since, numbers have steadily increased. This has led to the birds having a noticeable presence at Riverside Nature Park.

Sightings in April this year, recorded as many as 13 males singing at one time.

Further encouraging signs were shown across the 2019 summer period. Skylarks were seen taking food to nests, many young fledglings and skylarks singing over areas they have not nested in before.

"The story of the skylarks is an impressive one. It shows the positive impact we can all have to enhance our parks and their biodiversity.

"It is high praise that more people have been coming to Riverside Nature Park to see the birds and enjoy their birdsong."

The methods to help the skylarks came after consultation with Friends of Riverside Nature Park, learning from other local nature sites and guidance from Scottish Natural Heritage.

Clear surfaced paths have been outlined with signs set up to remind visitors to stay on the paths throughout most of the park from April to July.

New habitats have been created, including the largest wildflower meadows in Dundee. Bird watchers have identified more than 130 different species at the park and the adjacent estuary.

More information about Riverside Nature Park is available at: www.dundeecity.gov.uk/environment/riversidenature