17/02/20
Back to articles
Tweets by DundeeCouncil 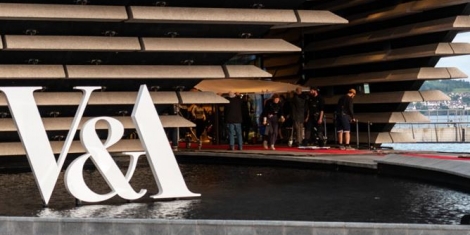 When it comes to featuring on the big and small screen, it’s been an excellent period for Fife and Tayside – with all kinds of film and TV productions delivering £5 million in annual economic benefits.

Highlights included series 2 of HBO’s Succession shooting on location in Dundee – including a memorable scene inside V&A Dundee - and Perthshire. It has since picked up Golden Globes for the series and its star, Dundonian Brian Cox.

All that screen presence has also helped to drive up tourism with productions like Outlander and The Outlaw King attracting a huge following of fans eager to visit both the film locations and the historic places depicted. New productions including Mr Jones and Traces are also helping to promote the region for tourism.

Production in the area also means jobs and business opportunities for everyone from crew to accommodation and catering, not to mention the diverse activities, services and products that are featured like golf, windsurfing, food and drink.

Councillor Mark Flynn, Depute Convener of City Development at Dundee City Council, said: “Screen production has such a great impact on raising the profile of the area so it’s brilliant to see the region’s popularity for all kinds of media production including film and TV continuing to grow.

“We are all delighted that Golden Globes were awarded to HBO’s Succession with Series 2 featuring locations in Dundee and Perthshire and, of course, starring Dundee’s own Brian Cox. With all the work on the Tay Cities Tourism Strategy, it’s absolutely putting the spotlight on the region.”

Regional screen office FifeScreen+TayScreen serves the councils of Dundee, Fife and Perth & Kinross. The office promotes the region to attract production and supports both production and development of the sector helping source locations, services and crew.

The office’s latest annual review shows that, during 2018/19, production benefited the region to the tune of £5 million, and the signs are even better for 2019/20.

Fife and Perthshire are huge favourites for production from drama to factual and V&A Dundee is proving a magnet that leads to productions using other locations in the city. As the report shows, highlights have ranged from spy feature Mr Jones to dramas Succession and Traces, commercial production for Ford and Porsche and prestigious fashion labels and brands like Harper’s Bazaar, Browns,  Jill Sander and Vogue.

This translates into hundreds of hours of free on-screen promotion through all the ways people interact with and enjoy content - broadcast, on demand, Amazon, Hulu, Netflix and now Britbox. The range of channels is ever growing.

The region also benefits when broadcast events choose locations like the Biggest Weekend at Scone Palace, the Open at Carnoustie and the Solheim Cup at Gleneagles, with BBC Radio 1’s Big Weekend to follow in Dundee later this year.

The office works closely with Digital Dundee to help develop the region’s creative digital sectors. Together they coordinate a €3m EU project called Create Converge which is about using creative, digital and tech to show, tell and sell.

It means business opportunities for services to work with each other and connect with client sectors beyond entertainment that not only keep the cashflow going but also offer routes to producing innovative work for service delivery, training, marketing and R&D.

Councillor Flynn continued: “The success we are enjoying is down to persistence, to the amazing and iconic locations we have and above all to the warm and highly professional welcome that productions encounter from everyone from location owners and Council services to universities, colleges and crew.”

TayScreen collaborates with new Creative Scotland screen agency Screen Scotland and other screen offices across the country through the Scottish Locations Network.

The office always wants to hear from people who want to get involved in any way with production and also offers an online directory for promotion of regional locations and services and a Moviemap that shows what has filmed where. Visit www.tayscreen.com

Message of Thanks from the Lord Provost and Council Leader

As people across the UK applaud tonight in tribute to NHS staff and those key workers dealing...

Dundee City Council is confirming its arrangements for free school meals while pupils remain at...