30/07/20
Back to articles
Tweets by DundeeCouncil 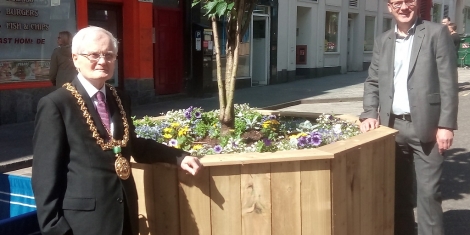 Businesses, shoppers and residents have welcomed a traffic ban on one of the main links between Dundee city centre and the Waterfront.

Union Street was pedestrianised earlier this month as part of the Scottish Government’s Spaces for People programme to create extra room for people to follow physical distancing guidelines and help to avoid a second peak of the virus.

Lord Provost Borthwick said: “It looks really different to the way it was before we went into lockdown but we have always been a place where positive change and new developments are part of the city’s growth.

“Trying things like this is an important part of keeping people safe and healthy as they start to come back to the city centre.”

Cllr Flynn added: “Opening up Union Street, with its mix of shops, pubs, restaurants and cafes to locals and visitors offers opportunities for everyone to experience this part of the city centre in a different way.

“Change is sometimes challenging but I am keen to ensure that we do it in a planned way and bring as many stakeholders with us as possible.

“I have already had a lot of good feedback and we will be monitoring the change carefully as part of the city centre investment plan to see if it is feasible to make it more permanent.”

Tables and chairs from local eateries have replaced on street parking and decorative planters and street furniture have been installed to enhance the shopping, dining and drinking experience.

The project has been supported by the work of the UNESCO City of Design Dundee team.

Delivery vehicles still have access at off peak times and buses have been re-routed to neighbouring streets.

Dundee City Council was awarded £460,000 from the Scottish Government’s Spaces for People Fund in May, which as well as being spent on the temporary pedestrianisation of Union Street covers work to introduce 20mph zones and through traffic reduction on various routes.

A second application to Sustrans for backing to bring in measures around physical distancing in District Centres, pop-up cycle lanes on commuter routes and upgrading the Green Circular was made last month. The results of this will be made known once the majority of funds from the city’s first successful bid has been spent.

AS MORE coronavirus restrictions ease and the economy re-starts in earnest, car park charges at...