07/09/20
Back to articles
Tweets by DundeeCouncil 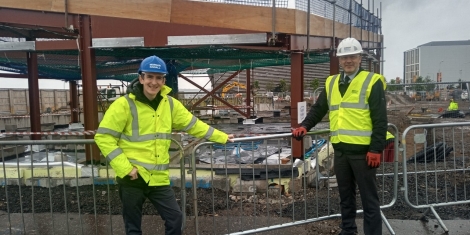 The only building on the site will promote cycling and other forms of sustainable and low carbon travel to visitors and residents of Dundee and have immediate access to the National Cycle Network that runs alongside the Tay and across to Fife.

After a tendering process it will be run by Angus Cycle Hub Community Interest Company (CIC), a not for profit social enterprise dedicated to supporting cycling and active travel.

Angus Cycle Hub project director Scott Francis said: “We are absolutely delighted to confirm we will be partnering with Dundee City Council and other stakeholders to deliver a range of community-based initiatives from the new building to continue to develop the city’s cycling and active travel renaissance.

“It’s a really exciting project for us and we hope to be able to bring the lessons learned from the projects we have been running in the Angus region to also benefit the Dundee area.”

Mark Flynn convener of Dundee City Council’s city development committee said: “Active travel infrastructure isn’t just about decent routes, well surfaced paths or signage, it’s also about knowing there’s somewhere to go to meet other people, get advice on routes or have your bike adjusted. It’s also good to have a destination where you can get a seat and a hot drink and a bite to eat.

“Angus Cycle Hub is a welcome addition to the city and we look forward to partnering with them to grow the opportunities for walking, cycling and scooting for everyone.”

It is intended that the hub will provide a prominent location to support the uptake of low carbon and active transport in Dundee and the wider area with facilities including bike hire, cycle parking, bike maintenance, community outreach and a kiosk for snacks.

It is hoped that the active travel hub, which has been supported by grants from Transport Scotland and nearly £1.2m from the European Regional Development Fund (Low Carbon Travel & Transport), will be up and running by early summer next year.

Formed in 2013 the company was officially registered and incorporated as a CIC in January 2014.

It opened the Cycle Hub in Arbroath to the general public in 2015 since when it has:.

Dundee Waterfront is an award-winning £1 billion regeneration project that is transforming 240 acres of land along 8km of the River Tay. Dundee Waterfront is split into five distinct zones and the project has secured £750m of committed investment. Most infrastructure works have been completed and the build phase is well underway, with a growing community of businesses and residents moving into the Waterfront area. More than 150,000sq metres of ‘shovel-ready’ land is available for development. Major projects already completed include the construction of a new railway station and the V&A Dundee. Other major projects currently on going include a new marina, port developments, offices, hotels, bars, shops, cafes and residential accommodation. Around 7000 new jobs will be created, providing a wide range of new employment opportunities. Dundee is the UK’s only UNESCO City of Design. Dundee Waterfront is a partnership between Dundee City Council and Scottish Enterprise.

2021 was the most successful year for the Living Wage Movement in Dundee.Over 25 employers signed...