Dundee in world's top places of the future

30/03/21
Back to articles
Tweets by DundeeCouncil 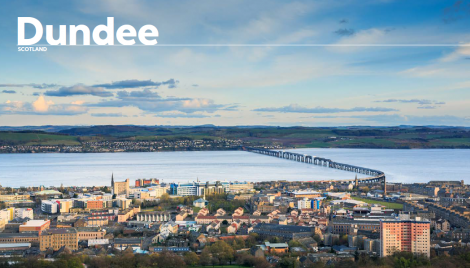 Dundee has been named as one of the world’s top “places of the future” in a report examining how new technologies will create jobs.

The 21 Places of the Future report looks for where new jobs will appear, hotbeds of innovation and ideas, and affordable & enjoyable places to work – places “where the future is being built right now.”

The study placed Dundee alongside major cities around the world such as Toronto, Wellington, São Paulo and Atlanta.

Dundee was highlighted for its thriving creativity, design and use of technology in the study by the Center for the Future of Work for Cognizant.

The report states the city is “a rising star in the experience economy” making the most of culture and tourism, as well as utilising industries with high potential such as cybersecurity and life sciences.

City Development Convener Mark Flynn said: “This is a very encouraging report for the city. Dundee is being recognised for its readiness for the future, its potential for growth and attractiveness as a place to work in and visit.

“The study acknowledges the city’s talent pool of high-quality workers who will help to drive Dundee on to achieve its potential. In addition to this, the recognition of Dundee’s offering for lifestyle identifies that the city will only continue to be an attractive place to work, start a business and live into the future.

“The city has also rightly been praised for its sustainability and infrastructure, with our electric vehicle network playing a large part in the analysis, including the roll-out of EV taxis.”

The report points to developments such as V&A Dundee and a proposed eSports arena in the Waterfront as examples of the city’s design and technology focus, as well as its UNESCO City of Design status.

The authors state that Dundee “thrives at the intersection of creativity, design and technology – just like the best-in-class video games industry established here.”

They also highlight recent investment in biomedicine and forensic science, and point out that the city’s scientific prowess is “central to Scotland’s international effort against Covid-19.”

Council Leader John Alexander said: “It’s great to see the city’s ambition and determination being recognised on the global stage.

“The report shows we have an excellent reputation in Dundee for design, culture, technology and scientific innovation, areas which will no doubt play a big part to getting the city to where we want it to be in the coming years.

“It’s very positive to see Dundee being promoted internationally at a time when many people will be thinking about life and travels after Covid-19.

“Our city has a lot to offer and I’m sure a lot of the areas highlighted in the report will play an important part in Dundee growing stronger in the future.

“Like any city, Dundee has its issues. However, I believe the city is on a path to fulfilling its potential and achieving the long-term goals set out for local residents and businesses.”

The full 21 Places of the future: Where is the future of work? report can be found here. A video showcasing the city is also available.