29/04/21
Back to articles
Tweets by DundeeCouncil 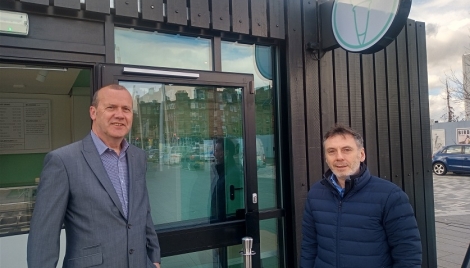 THE LATEST development at Dundee’s £1bn waterfront has officially opened its doors for the first time to a mouth-watering reception.

Jannetta’s Gelateria have marked the occasion by unveiling an exclusive new marmalade and ginger flavour ice-cream in conjunction with local food manufacturer Mackays.

And today (THURSDAY) Mark Flynn convener of Dundee City Council’s city development committee was first in line with the keys to the Slessor Gardens Pavilion and cash for a cone!

He said: “Jannetta’s are exactly the type of local, high-quality and well-known business that we had in mind for the pavilion at Slessor Gardens when it was planned and built, so I’m delighted to see them opening up, just as the weather improves and the lockdown eases.

“We concluded the lease earlier this year and since then Owen and his team have been working hard in preparation for today’s official opening.”

Owen Hazel of Jannetta’s added: “This is an extremely exciting step and the most amazing news for the Jannetta’s team and family.  We would like to thank Dundee City Council for their help in making this happen.

“As well as working with Mackays on the new flavour, we have also teamed up with Mezzaluna, Dundee to provide a range of Italian cuisine at the site.”

The 40 square metre pavilion is on the south-western side of Slessor Gardens adjacent to South Crichton Street and close to the V&A Dundee and the soon to be occupied Agnes Husband House.

It will initially open 10am to 5pm seven days a week.