22/09/21
Back to articles
Tweets by DundeeCouncil 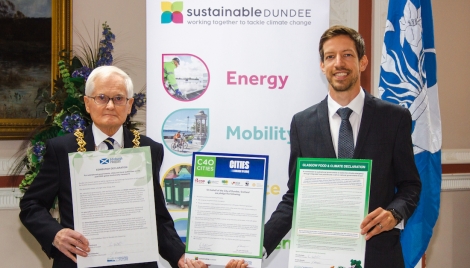 The city council has already declared a climate emergency and a Dundee Climate Leadership Group has been established to help achieve net-zero greenhouse gas emissions for the city in the next 25 years.

Lord Provost Ian Borthwick said: "Climate change is one of the biggest issues we face and it is only right and proper that we are signing these declarations.

"Doing so is another step on our path towards making Dundee a safer, greener and more sustainable place to live."

"We know we all need to come together to tackle the climate emergency and make changes that will make a big difference to our world, today and tomorrow."

Cllr John Alexander said: "We take the climate change emergency extremely seriously in this city and are already taking direct action to try to make a difference.

"Over the last 13 years or so, the council has lowered its carbon footprint by 42% and our capital plan for the next five years contains an additional £22m of projects which focus on energy, mobility, waste and resilience.

"This includes £9m for the Broughty Ferry to Monifieth active travel corridor, £6m for sustainability and low carbon projects, £3m for housing energy saving measures and projects including sustainable transport and infrastructure and fleet electric vehicles.

"Dundee will be making its voice heard during COP26 later this year and signing up to these declarations now further strengthens our efforts.

"Local government has a big role to play in impacting on climate change, not only must we lead the way with initiatives such as the low emission zone, we must work in partnership with the private sector across the city to encourage them to adopt more sustainable practices.

"We know there is still more we can and will do. Climate change is one of the biggest issues facing us all and we are committed to making a real difference to improve the current situation not just for ourselves, but for future generations."

Mark Watts, Executive Director of C40 Cities added: "By signing onto the Cities Race to Zero, Dundee joins a coalition of cities leading the global response to the climate crisis.

"Local leaders recognise that we are running out of time to address the climate emergency, and through the Race to Zero campaign, they are pursuing strong, accountability-based plans to reduce carbon pollution in line with scientific demands.

"As we approach COP26, it's more important than ever that cities, businesses, and institutions declare their commitment to a green and just recovery from COVID-19, set ambitious goals to achieve the 1.5C target of the Paris Agreement, and urge their national governments to follow their example. We applaud the city of Dundee for taking this important step to demonstrate its firm commitment to creating a more resilient, equitable future."

This pledge publicly highlights the message that the city of Dundee recognises the global climate emergency and will reduce the city's emissions to net zero by 2045 at the latest. This would be led by partnership working to deliver the Dundee Climate Action Plan.

Scottish Government initiative through the 'Edinburgh Process' which is a means for local authorities to be formally represented in the international process and to show support for global action to protect and enhance biodiversity.

The city will work on actions set out within Dundee's Biodiversity Action Plan 2020-2030 and Dundee's Climate Action Plan.

Search Continues for Citizen of the Year

This year?s quest to find Dundee?s Citizen of the Year 2022 continues.Each year the council...

A new survey has been launched to shape the council?s free period poverty service.Since October...