01/07/22
Back to articles
Tweets by DundeeCouncil 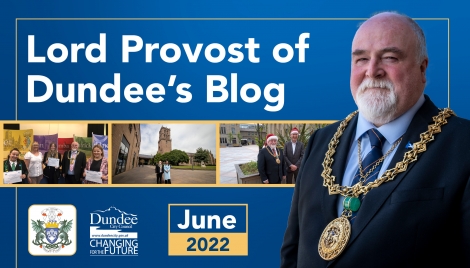 Hello, and welcome to my first Blog. I want to introduce myself. I am the newly-elected Lord Provost of Dundee, Bill Campbell.

I have recently had the great privilege and honour of taking up the position as the city’s Lord Provost, after serving as Depute Lord Provost for the past five years.

I want to take the opportunity to explain my role, both in the Council and for the City, a bit further. As the Lord Provost, I am the non-political civic head of Dundee and the City Council. Within this role, it also includes being the Lord-Lieutenant of Dundee, which means I will serve as the Queen’s official representative for the city.

As the city’s civic head, I will carry out a wide range of duties which can include civic receptions, promoting Dundee both home and abroad, and maintaining links with our twinned cities.

Depute Lord Provost Kevin Cordell and myself have been kept busy with many official duties. I would like to take this opportunity to thank Bailie Helen Wright, Bailie Will Dawson, and Deputy Lord-Lieutenant David Dorward for their assistance with the University of Dundee Graduations.

Across June 2022 much has taken place, including;

Thank you for reading this Post and I hope to update you further on my civic responsibilities in the future through my July blog.

Back to articles
Tweets by DundeeCouncil
New Construction Apprentices welcomed

The latest intake of Dundee City Council?s Construction Services apprentices have been welcomed...

Children and families convener Stewart Hunter is congratulating pupils on their achievements as...