06/07/22
Back to articles
Tweets by DundeeCouncil 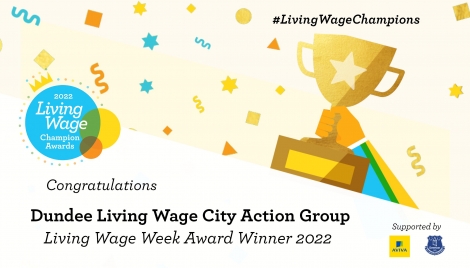 At last night’s Living Wage Champion Awards, the Dundee Living Wage Action Group was recognised for its leadership in the 2021 Living Wage Week.

Combining both online and in-person events, Living Wage Week 2021 was a resounding success, and the group was a driving cause for that success.

During Living Wage Week, the group celebrated newly accredited Living Wage businesses in the city, ran a stencil campaign on the street to highlight the businesses that pay the real Living Wage, created a social media campaign for the week, and celebrated Dundee Science Centre winning the resilience category at the Living Wage Scotland Awards.

The Dundee Living Wage Action group is made up of a number of Living Wage accredited Dundee based employers, including Dundee City Council, Michelin Scotland Innovation Parc, Dundee and Angus Chamber of Commerce, and Social Security Scotland.

Katherine Chapman, Director, Living Wage Foundation, said: "Despite the continuing challenges of the past two years, the Living Wage movement has never been stronger – we’ve continued to grow, welcoming our 10,000th employer, and tonight we come together to recognise some of the outstanding leadership these employers have shown. The Living Wage Champion Awards 2022 are a fantastic opportunity to celebrate the importance of a wage that covers the cost of living and the value this provides for workers and businesses, particularly during the cost-of-living crisis, and I warmly congratulate Dundee Living Wage Action Group on their deserved award.”

Fairness Spokesperson Councillor Lynne Short said: “It’s great to win this award. The Dundee Living Wage Action Group work incredibly hard to increase the wages of people across the city and it’s fantastic that their hard work is being recognised.

“We have recently celebrated reaching over 100 accredited Living Wage employers in the city and I look forward to celebrating the next 100.”

Councillor Georgia Cruickshank, Fairness Spokesperson added: “I have continued to be inspired by the work of the Dundee Living Wage Action Group.

“This award is a testament to the incredible effort and dedication of the group as they continue to grow the Living Wage movement and strive to make the Dundee the first Living Wage City in the UK.

“I look forward to working with the group in the years ahead to help champion the Living Wage movement in the city.”

The annual Living Wage Champion Awards celebrate notable employers that pay the Living Wage. This year they recognised the movement welcoming its 10,000th accredited Living Wage Employer, an incredible achievement during a cost-of-living crisis where paying a real living wage is more important than ever. The awards were sponsored by Aviva and Everton FC.

Back to articles
Tweets by DundeeCouncil
Strategy to increase social housing

Councillors will be asked to approve an Open Market Housing Acquisition Strategy which could...

Take Pride in Your City Update

Take Pride in Your City Update

City Councillors are to hear of the progress in the council?s Take Pride in Your City campaign as...