08/08/22
Back to articles
Tweets by DundeeCouncil 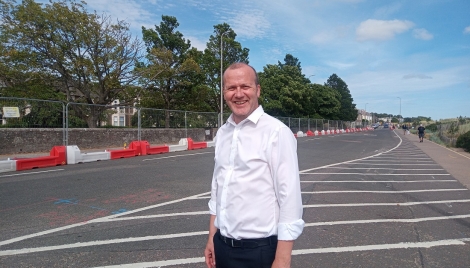 WORK ON the latest stretch of the multi-million pound Broughty Ferry to Monifieth active travel route started earlier this week.

Tayside Contracts will spend the next six months excavating and removing the south footway and creating a new one and additional segregated cycleway at the Esplanade. The works will also include provision of new drainage.

Mark Flynn convener of Dundee City Council’s city development committee has been on site to see the start of works for himself.

He said: “This section will deliver Dundee’s first fully segregated cycle track from Castle Lane to Bridge Street and a wider south pavement along the full length of the Esplanade.

“Work has been scheduled to keep disruption to a minimum and as well as signposted diversions for drivers, access to the north footway will be unchanged with provision made for cyclists throughout the works.

“The whole £9m scheme is being tackled in bite sized chunks, each of which will be brought together to complete this ambitious and unparalleled investment in active travel.”

Work has already been completed on North Balmossie Street to support active travel for residents from the large population to the north east of Broughty Ferry, Barnhill, Panmurefield and the north end of Monifieth.

Funded by the Scottish Government through Sustrans Scotland’s Places for Everyone programme with Dundee and Angus councils, the £11.6m coastal path project will provide a continuous off-road route between Dundee and Monifieth.