22/09/22
Back to articles
Tweets by DundeeCouncil 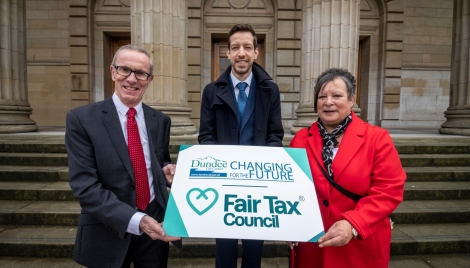 Dundee City Council has joined a growing movement of cities, towns and districts standing up for responsible tax conduct.

At a recent meeting of the policy and resources committee, members agreed to sign the Fair Tax Foundation’s Councils for Fair Tax Declaration.

The council joins 28 other Fair Tax Councils across the UK, including South Lanarkshire and Edinburgh in Scotland.

The Fair Tax Foundation has developed the Councils for Fair Tax Declaration in collaboration with UK cities, towns and districts who believe that they can and should stand up for responsible tax conduct - doing what they can within existing rules and pledging to do more if given the opportunity, as active supporters of tax justice.

Dundee City Council has committed to leading by example on its own tax conduct, promoting good tax practice amongst supplier firms, and promoting the Fair Tax Mark certification to businesses in which it has a significant stake and where corporation tax is due.

Committee convener and Council Leader John Alexander said: “As recipients of significant public funding, the council should take the lead in the promotion of exemplary tax conduct.

“I think it’s incredibly important that we are seen to employ best practice in this area, and that we encourage others to do the same.”

Councillor Craig Duncan, who raised the matter at committee, said: “Everyone needs to pay their fair share of tax, especially now when public spending is under such intense pressure, and we need to maintain public services to help people suffering from the cost-of-living crisis.

“Promoting the payment of tax strengthens that commitment to fairness, equality and social justice.

“By signing the Fair Tax Declaration, we are seeking to lead by example. We are also recognising the tax contribution made by responsible businesses, and ensuring that the organisations we contract with are encouraged to pay the amount of tax the law intends."

Polling commissioned from ICM by the Fair Tax Foundation found that two-thirds (66%) of the public agree that the Government and local councils should consider a company’s ethics and how they pay their tax as well as value for money and quality of service provided, when undertaking procurement.

“In doing so, Dundee City Council is committing to the highest possible standards of tax conduct in its own affairs, and is joining other supporters of the Declaration in calling for greater powers to tackle tax avoidance amongst suppliers.

“At the Fair Tax Foundation, we believe that ‘good’ tax conduct should be a core public procurement consideration. Not only because it helps level the playing field for competing suppliers and bolsters the national corporate tax take, but it also enables better identification and mitigation of financial and corruption risks by contracting authorities.”