26/10/22
Back to articles
Tweets by DundeeCouncil 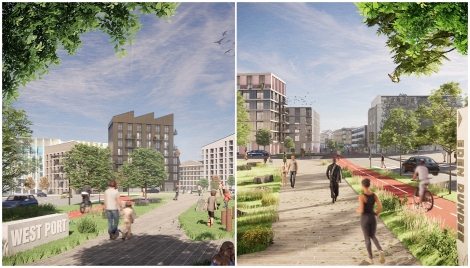 The final draft of an ambitious 30-year plan to steer development and investment opportunities for Dundee city centre could be out for consultation within the week.

If the City Centre Strategic Investment Plan (CCSIP), which sets out a vision for the city centre as an exciting, growing place to live, work and visit is given the green light by councillors on Monday (OCTOBER 31) public consultation will begin the following day.

With nine key targets under the themes of living, working, visiting, connectivity and public realm, the strategy has already been the subject of previous widescale discussions.

Mark Flynn convener of Dundee City Council’s city development committee said: “Everyone knows that city centres have been changing out of all recognition as a result of many different factors for a number of years, most recently the aftermath of the pandemic and the effect it has had on ways of working.

“But using our own creativity and resources a number of positive initiatives have been implemented in the city centre recently, including the successful pedestrianisation of Union Street.

“What this document seeks to do is build on schemes like that and come up with a variety of ways of breathing new life into the city centre, which are specific to us and will give us the edge when it comes to regenerating the heart of Dundee.”

Work with stakeholders and businesses to support the recovery, including marketing of the city to visitors and hosting events and activities, is continuing.

Meanwhile in a separate report, councillors will be asked to back a pilot scheme to improve the city centre’s appearance by changing the way commercial waste is presented.

Identified as an issue as part of the council’s “Take Pride in Your City” campaign, the sight of bulky, brightly coloured trade waste containers can detract from the streetscape, architecture and public art.

Under the scheme waste must be stored on the business premises within the city centre and can only be presented for collection at specified times.

Similar schemes are already operating successfully in Aberdeen, Edinburgh, Glasgow, Inverness and St Andrews, and if councillors back the move the Dundee trial will start next March.

The £45,000 one-off cost of running the pilot will be met from Scottish Government city centre recovery funding.

Both reports will be considered by the city development committee which meets on Monday (OCTOBER 31).