27/10/22
Back to articles
Tweets by DundeeCouncil 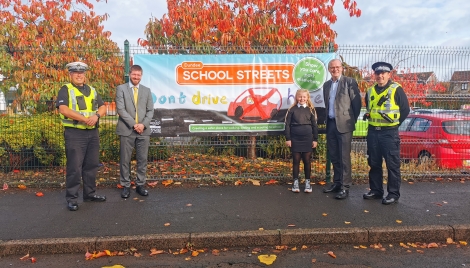 The next steps in a programme of safety measures for streets around schools in Dundee could be taken by councillors next week.

The council’s city development committee will be asked to approve the promotion of a Traffic Regulation Order restricting vehicle access during school start and finish times at five further primary school locations.

Mark Flynn convener of the city development committee said: “It is already clear that bringing in the Safer Streets measures at Forthill, St Mary’s and Fintry has reduced car journeys and increased the number of children choosing more active ways of getting to and from school.

“The benefits of that, not just for the individuals involved, but also for the wider community are clear with better air quality, less congestion and better road safety.”

In areas where the scheme is proposed there will be a part time prohibition of driving from Monday to Friday on school days from 8.30am to 9.15am, and 3pm to 3.30pm in streets around the five primary schools.

A free permit to be displayed on the windscreen will identify residents’ vehicles, and will be available from Dundee City Council.

Head teachers and parent councils at the five schools identified for the next phase have been notified of the proposals and other stakeholders have also been made aware.  Further discussions with the school and wider community will take place during the statutory consultation period if the committee approve the Traffic Order’s promotion.

Previously approved proposals already in place at Downfield, St Andrew's, Craigiebarns, North East Campus and Coldside Campus are due to come on stream later this financial year, and these further five locations will mean more than a dozen places will be covered by March 2024.

The proposed expansion comes as pupils at Fintry PS have unveiled banners they designed to remind drivers not to drive near there.

Since the scheme was introduced at the school just over a year ago the percentage of children being driven to school has dropped with a similar increase in those walking, cycling and scooting to school.