19/01/23
Back to articles
Tweets by DundeeCouncil 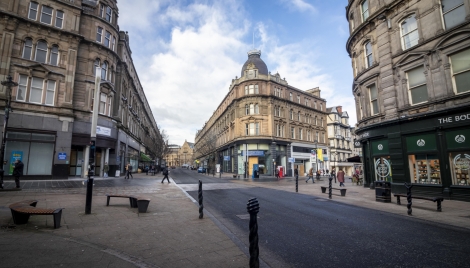 IMPROVEMENTS proposed to a major city centre junction will enhance pedestrian safety and make the area more attractive according to a new report.

The city development committee, which meets on Monday, (January 23) will be asked to approve up to £400,000 for changes at the Commercial Street/Murraygate junction.

Mark Flynn committee convener said: “I’m delighted with this recommendation to enhance and extend the existing shared surface across Commercial Street into Murraygate, which will clearly define that this an area where pedestrians have priority.

“In addition, we want to make the carriageway of Commercial Street at the Murraygate junction a single lane with traffic going from Seagate towards Meadowside given priority.

“Taken together doing this work will help to deliver a safer and more accessible city centre, which will help to achieve one of the goals in the new City Centre Strategic Investment Plan.”

Currently the city centre road network limits though traffic by designating certain streets as pedestrian and servicing only, and bus and/or taxi only.

If approved project design and implementation will get underway before the end of the financial year.