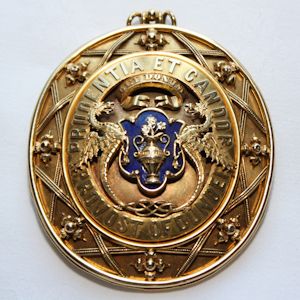 It was customary for the Provost and each City Baillie to wear Chains of Office but subsequent to the Dundee Police & Improvement Act of 1871, the number of Burgh Magistrates was increased from four to six. Up to that time, the Chain of the Provost was long enough to allow several coils around his neck, but following the elections of November 1871, Provost Yeaman resolved to divide his chain to provide the six new Baillies with their usual chain of office and the Council agreed that a new chain of office be obtained for the Provost.

The new chain, which is still in use, was supplied by Mr William Alston, a Jeweller of Dundee, who obtained a chain worthy of the dignity of the Chief Magistrate of Dundee from one of the leading goldsmiths in London.

It is interesting to read from the cash accounts of the Council under the heading 'Casual Expenditure' that on April the 17th 1872, the princely sum of one hundred and ninety-two pounds and ten shillings, (£192.50p), was paid for "Massive Gold Chain and Badge for Provost" and that a further five pounds and five shillings, (£5.25p), was spent on a 'Morocco Case for Same.'

The chain is formed of diamond shaped links, each approximately one inch in length and joined together by double oval rings, with banded figures of eight lateral. The whole chain from end to end is forty-two inches in length and suspended from the middle of the chain is an oval gold badge four inches high by three inches wide ornamented with fleur-de-lis and in the centre the City's Coat of Arms and Motto with the additional words 'Provost of Dundee' (This was some years before Dundee had authority to use the title Lord Provost, thus the badge still carries the original wording). Both chain and badge are of fine gold, stamped 18 carats and the total weight is 26 troy ounces.

In a ceremony, during a tour of Ashton's Works on the 10th of July 1914, King George V pressed an emerald button and Queen Mary one of jade which started machinery lowering the foundation stones of the Caird Hall into place. Both the buttons were presented to their majesties, the Queen accepted the jade stone as a memento but the King handed back the emerald to Sir James Caird with the wish that it should remain in the hands of the City; so it was incorporated into the Chain of Office and remains in pride of place in its matching gold setting directly above the gold badge. 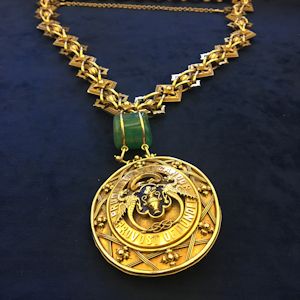 Incorporation of the "Caird" Emerald

The emerald which is now incorporated in the chain directly above the oval badge of office is not often recognised as such.

Emeralds come in a variety of forms, the type used in jewellery are of a clearer variety and although very seldom 'perfect' have a brilliance comparable to rubies and sapphires.

Cloudy emeralds of which this stone is a magnificent example are seldom used to form gemstones but this example is known to be the second largest emerald ever discovered and virtually impossible to put a realistic value to. Therefore after the completion of the ceremony to lay the foundation stones for the Caird Hall, the King was offered the gem.

The actual history of the gem is relatively unknown.  Despite lengthy research, no documentation appears to exist with regard where the gem was mined, where it was purchased or what price was paid for it.

One story is that it was 'found in Brazil' but nothing to confirm this has ever been found.