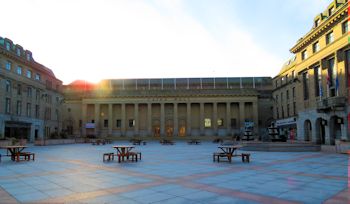 "There can be no doubt that the City Square and Municipal Chambers as now completed, has added a dignity to the City itself. It has opened up a portion of the area that was to say the least of it, tumbledown and gives a new setting to the Caird Hall." - So began the official souvenir programme to the opening of the new City Square Buildings by H.R.H. Prince George (later the Duke of Kent) on the 30th November 1933. The City Square complex, which comprises the Caird and Marryat Halls, the Council Chambers and Offices of various Departments of the Council as well as commercial premises, was begun in 1914. In that year, Sir James Caird, a local industrialist, donated £100,000 to defray the cost of building a new City Hall and Council Chambers and the foundation stones were laid on the 10th of July that year by King George V and Queen Mary during a tour of Ashton Works. The building costs increased, partly due to the First World War and so Sir James Caird's sister, Mrs Emma Grace Marryat, donated a further £75,000 to complete the scheme. This included the main Caird Hall, the adjacent smaller Marryat Hall, two floors of backstage and service accommodation and a new Council Chamber and Lord Provost's Room.

The Caird Hall was formally opened by H.R.H. The Prince of Wales (later Edward VIII) on the 23rd October 1923. The interiors were executed by Scott Morton and were finished in terrazzo, marble, mosaic, with mahogany panelling and heavily moulded and enriched plaster work. The Marryat Hall was decorated in a Louis XV style of ornamentation, elongated by mirrors at each end of the room. The Lord Provost's Room and Council Chamber were decorated and finished in the Adam style. The City Architect, James Thomson, had originally planned an immense Beaux Arts style Civic Centre covering the centre of Dundee. The War intervened, his plans were scaled down and he retired in 1924 having witnessed the completion of many of his other progressive ideas such as the 'Kingsway' City Bypass, combined road widening and slum clearance, the Craigie Garden City Estate and the first ever district heated housing scheme at Logie.

Thomson died in 1927 and it was his former assistant James McLellan Brown who, as Depute City Architect, remodelled Burnet's designs in 1931 and produced the scheme that was built.

This had followed Dundee Corporation's successful deputation for a Ministry of Labour grant to fund the building programme, which involved providing much needed employment as well as centralising the then scattered Corporation Offices.

Providing new buildings meant sacrificing some of the old. The demolition of the William Adam designed Town House (or The Pillars) in 1932, was even then most controversial and was commemorated by models erected above nearby shops in the same year. The Town House had itself replaced the City's sixteenth century Tolbooth in 1732-4. Thomson had actually put forward an alternative scheme that retained the Town House as the centre feature of the City Square but this was not developed.

The Square itself was laid out as a central plaza with a roadway around it and the area underneath was left available for future development. The roadway was removed in the 1980's and trees, fountains, new paving, and street furniture to complement the buildings' metalwork were installed.

The design of the new wings was intended to be as simple as possible with cornice lines and window levels continuing from existing buildings. Ground floor and stone detailing is in Creetown granite with Leoch sandstone above. The shops originally had Hoptonwood marble surrounds and bronze window frames. The uniformity of the shop fronts, so important in the design, can still be seen in surviving shop premises on the east side of Crichton Street and numbers 6-8 and 17 City Square.