Royal Authority to use the title 'Lord Provost'

Royal Authority to use the title 'Lord Provost' container

Royal Authority to use the title 'Lord Provost' content 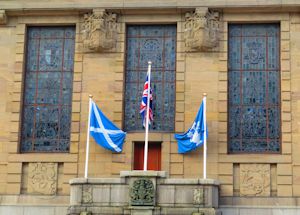 The office of Chief Magistrate or President of Council originated with the formation of burghs in Scotland from the twelfth century onwards. Long association with French custom led to the use of the term 'Prévôt' or Provost as it became and 'Bailli' which became Bailiff and subsequently Baillie, a term still used in Scotland today.

Until the 'Sack of Dundee' by Cromwell's troops in 1651, the town was second only to Edinburgh in terms of wealth and population and like Edinburgh it liked to preface its title of chief magistrate by the respectful preface of 'Lord'. The usage was not constant but there are recorded examples such as the Convention of Royal Burghs which was held in Dundee in 1692 and the Chairman elected to the Convention was referred to as James Fletcher - 'Lord Provost of Dundee'.

Thereafter the Provost of Edinburgh was consistently referred to as Lord Provost but Dundee had a period of economic troubles throughout the eighteenth century and consequently reverted to the simpler title of Provost for its Chief Magistrate.

Only on its rise in stature with the development of jute, textiles and heavy engineering did Dundee once more have ideas of image and in 1887 the Council minuted during a meeting that it deserved formal recognition and decided to petition the government for Royal Authority to use the term 'Lord Provost'. 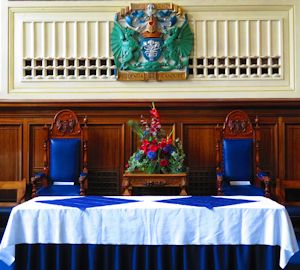 Although the authority took nearly four years to be ratified, the Council, assumed that authority would be automatic and Provosts William Hunter (1887-1890) and Alexander Mathewson (1890-1893) anticipated permission by styling themselves Lord Provost before official authority was granted in 1892. When the public announcement was made on 12th February of that year (which was also the year of Queen Victoria's 55th Jubilee) it stated that - "Her Majesty is graciously pleased by Royal Warrant to decree for all time coming the Chief Magistrate of Dundee should be known by the style and title of Lord Provost".

The town duly celebrated official recognition by staging a grand banquet for '220 gentlemen' on Friday the 11th of March which was held in the Victoria Galleries and included a regimental band and a forty strong guard of honour from the local regiment of the 1st City of Dundee, Volunteer Brigade of Royal Highlanders. The walls were hung with fine paintings loaned for the occasion and on the head table was a gold plateau holding a gold fountain and the eight other tables had silver centrepieces holding vast floral displays, the entire hall finished off with hundreds of 'fairy lamps and white lights'.

The splendid meal was purveyed by Colonel Smith of the Queens Hotel and was followed by eighteen toasts from local dignitaries and Provosts and Lord Provosts of other Scottish towns and cities. In all it was a very grand affair.

The application had of course been assisted by the fact that Queen Victoria granted Dundee its last Royal Charter in January 1889, raising Dundee's status to that of 'City' - the Charter reciting all previous charters granted to Dundee including the Confirmation by Robert the Bruce in 1327, which in turn referred to the rights granted by William the Lion circa 1191. 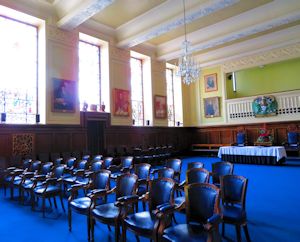 Under the Dundee Corporation Act of 1894 the City's status was once again raised to that of a 'County of a City' which had the consequence of the Lord Provost also having the responsibility of a 'Lieutenant', who would be answerable to the Queen for ensuring that the militia or defence force was in an efficient and ready condition should they ever be called upon to serve the throne, in whatever role they be given.

Therefore, in present times, the wearer of Dundee Lord Provost's Chain of Office has a variety of responsibilities and duties both traditional and modern and represents an unbroken succession of over two hundred and seventy elected or appointed officers. These officers go back over 800 years to the formation of the burgh itself through a history of rich and varied times, occupation and times of strife up to the present day.