06/11/17
Back to articles
Tweets by DundeeCouncil 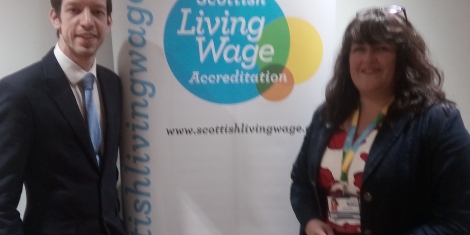 AS ONE of more than 800 Living Wage Accredited employers in Dundee the city council has announced its backing for the latest phase of the anti-poverty campaign.

On the eve of Living Wage Week the council is encouraging consumers to buy from Living Wage Accredited retailers and businesses.

Lynne Short convener of Dundee City Council[‘s city development committee said: “Already around 40% of people say they care if the products and services they buy are from a Living Wage employer, and next week’s campaign wants to push that figure even higher.

“If you run a business that’s 40% of your customers and their buying decision which is a big chunk of anyone’s turnover.

“In the same survey 75% of Scots asked said they think more highly of a company which became accredited for paying the real Living Wage.”

In Scotland the Living Wage currently stands at £8.45 per hour but to mark the start of a week of activity this year’s rate will be announced today (Monday). Independently calculated it is the only rate calculated to meet the real cost of living.

Cllr Short added: “As well as the direct benefits to businesses who pay the Living Wage and become accredited, we know that there is also a straight economic benefit to the wider community.

“Employees who benefit from a pay rise and receive the Living Wage spend that money locally.

“It may sound simplistic but so many of the best ideas are.

“When people earn more they spend their money close to where they live, which might be the basics like a weekly shop but with the newly found disposable income they have it could mean a night out at the pictures or a new pair of shoes.

“Whatever it is they are spending their money on, in every case it creates a virtuous circle of spending in their local economy, which sustains other jobs, hopefully also being paid the Living Wage, and the upward cycle starts again.”

Back to articles
Tweets by DundeeCouncil
Creating Accessible Play Facilities