On your bike for an active Dundee

26/12/17
Back to articles
Tweets by DundeeCouncil 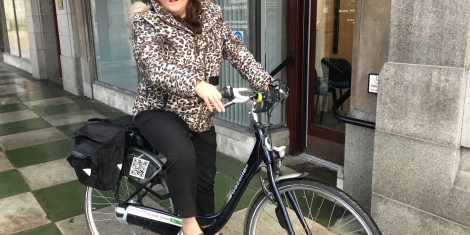 A LEADING councillor has teamed up with a Dundee electric bike retailer to highlight the benefits of cycling.

Cllr Short said: “It’s all very well me going on about the benefits of cycling and other forms of healthy and sustainable travel, but the best way of really showing what it’s all about is to get out there and do it myself.

“I must admit that there are a few second and even third thoughts, but the guys at EBS assure me that I’ll be safe and putting it on the line rather than just sitting in my car or on the bus talking about how great cycling is.

“I’ve been using the bike to go to and from work and if I can do it anybody can!”

In June the council approved more than £200,000 worth of improvements to the city’s infrastructure for cycling and walking.

The cycling strategy for the city expressed a number of ambitions that this money will help to achieve including filling in some of the missing links in the network.

Cllr Short added: “Recent statistics show that only 1.3% of commuter trips are done by bike, but a quarter of the city’s households have access to one so it’s time to get them out of the shed and spin those wheels.”

After consultation with interested groups Dundee City Council approved its cycling strategy for the city in 2016.

The strategy makes sure that cycling and walking have at least a 5% share of the total spending on roads and transportation each year.