06/09/19
Back to articles
Tweets by DundeeCouncil 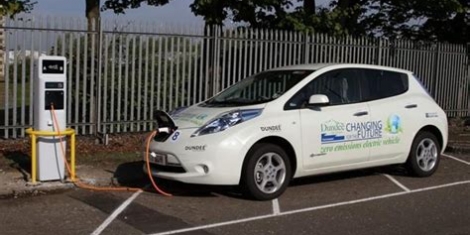 DRIVERS of electric vehicles will start paying for their power on November 1, if new plans by Dundee City Council are approved.

But a membership scheme for city residents to apply for a 100% discount could be brought in to ensure the move towards using electric vehicles continues.

A standing charge of 38p is proposed on each transaction with tariffs for businesses and non-residents at a rate of 15p per kWh.

Alan Ross convener of Dundee City Council’s city development committee said: “The rates we are looking to introduce are fair and cover the council’s costs when everything is taken into account.

“EV drivers have been expecting this and Dundee residents who own an EV and who register with the scheme will receive 100% discount while funding is still in place.

“These costs are still considerably cheaper per mile than an equivalent vehicle powered by petrol or diesel, not to mention the improvements in the city’s air quality.”

Dundee is recognised world-wide as a leading city in the introduction and support of electric vehicles. Currently more than 900 are registered for the council’s free parking for EVs scheme and the council fleet runs to 100 EVs.

Charging infrastructure in the city has continued to grow since it was first introduced in 2011 and last year saw the opening of three “globally significant” charging hubs to support current levels of EV use and provide reassurance to potential owners that there is a robust network for the future.

Recent figures have shown that on an average annual mileage of 50,000 the fuel cost of an EV is £6500 a year less than its diesel/petrol counterpart.

In a separate report councillors will be asked to approve a tender for the second of three major charging hubs at the city’s multi-storey car parks.

A total of 20 charging points and associated infrastructure is proposed for the lower roof level at Olympia. Swarco UK’s tender is recommended for approval at a total cost of £634,038.

DUNDEE City Council?s planning performance has been rated at the highest level in 11 out of 13...