14/11/19
Back to articles
Tweets by DundeeCouncil 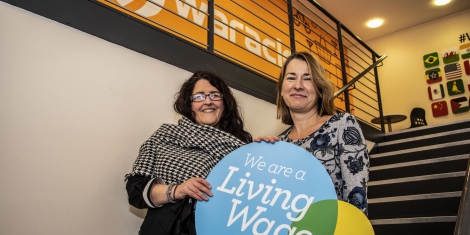 Waracle have been announced as an accredited Living Wage Employer.

This announcement is part of the Living Wage Week celebrations in Dundee.

Waracle is one of the UK’s leading Mobile, Web, Emerging Tech Company. From AR to Voice, IoT to Apps, Waracle breathes life into ideas and drives digital difference for some of the world’s boldest innovators.

The new Real Living Wage rate has been announced for the UK this week and is £9.30. Waracle’s accreditation ensures all staff and regular contracted workers earn the voluntary rate of pay set annually by the Living Wage Foundation.

Councillor Lynne Short, Fairness Spokesperson for Dundee City Council said: “Throughout Living Wage Week I’ve been very impressed by the leadership that has been shown in Dundee this week, we have companies of all sizes joining our Make Dundee a Living Wage city campaign.

“By paying the real Living Wage it allows those in work to become more included in society, better provide for their families and feel valued by their employers.

“I would urge any business in Dundee thinking of becoming a Living Wage employer to get in touch with us.”

Angela Rieu-Clarke, Head of HR at Waracle said “Waracle are delighted to support our staff across the UK by ensuring that everyone is paid the Living Wage."

Jack Evans, Living Wage Scotland Manager said: “It is fantastic to see Waracle join the Living Wage movement.  They join with 150 other organisations in Dundee, and over 1600 Scotland wide, in recognising the value in paying a wage that reflects the cost of living.

“We know that receiving the real Living Wage means that workers can be happier and healthier at work, but there are also real benefits to the business as well.  I hope more employers in Dundee follow Waracle’s example and become accredited Living Wage employers.”

The leader of Dundee City Council today welcomed the easing of restrictions following...